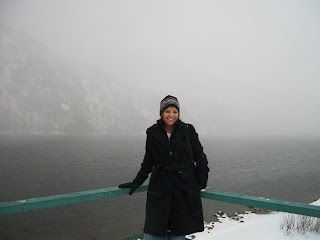 As it enters the 21st Century, North Dakota is enjoying the windfalls of an unprecedented oil boom, the largest oil discovery in the world in the past 30 years. While the rest of the country struggles with high unemployment and lethargic economic growth, North Dakota has a $1 billion budget surplus and the nation’s lowest unemployment rate at 3.7 percent. However, North Dakota’s economic future remains uncertain. While in Russia, I presented the issue of outmigration of youth from rural areas and the similarities and differences between North Dakota and rural Siberia.

Siberia is vast. At 5.2 million square miles, it covers about one-third of northern Asia, makes up an astounding one-twelfth of the land mass of the entire earth and boasts nine different time zones. However, it is not a country (it’s shocking how many people think that it is) and it is not a state or province. It has no formal boundaries and it can best be described as a region, something like the “Midwest” or the “corn belt.” In fact, when the Russian czars started developing this area in the fifteenth and sixteenth centuries, they called it “the wild east.”

Links can be drawn between North Dakota and Siberia. Cold weather is an obvious one. Although the northern tier of Siberia is perma-frost, at SibSAU University, located in the charming 400-year-old city of Krasnoyarsk, the weather is similar to North Dakota: frigid winters and blasting hot summers. Siberia has four main rivers, and the largest of them is the Yenisei River which flows through the center of Krasnoyarsk. All four rivers flow from south to north, causing problematic flooding as they thaw in the south while still frozen at their mouths. This will sound familiar to the people filling sandbags this spring, and last spring, and the spring before along North Dakota’s Red River.

Like North Dakotans, the people of Siberia hope to keep their bright, entrepreneurial young people home. College graduates, however, tend to want to go to bigger more cosmopolitan places. Again, echoes of North Dakota.
Posted by Debora Dragseth at 2:58 PM

Listen to Debora on Prairie Public Radio as she describes her research for her book "Should I Stay or Should I Go?” a study of out-migration of North Dakota colleges students.